The Ichihara Lakeside Museum collection is composed mainly of works by Yukio Fukazawa, one of Japan's leading printmakers and an honorary citizen of Ichihara City. The collection’s 500 works include copperplate prints, glass paintings, pastel paintings, and calligraphies. The works displayed in the Permanent Collection Gallery are owned by Ichihara City and are changed four times each year.

Yukio Fukazawa was born in Yamanashi Prefecture in 1924. After graduating from Tokyo Fine Arts School (currently Tokyo University of the Arts), he moved to his wife Sakiko’s parents’ home in Tsurumai, Ichihara City, where he continued his vigorous practice for the rest of his life. Having taught himself copper engraving in 1955, he explored many techniques, and, while changing his style several times, he produced over 1300 works with the consistent theme, “Human Being.” He exhibited at many exhibitions both in Japan and abroad, and received numerous awards, including the Medal with Purple Ribbon and the Order of Culture of Mexico, Aguila Azteca. His works were acquired for their collections by museums both in Japan and abroad, including the Museum of Modern Art (MoMA) in New York, the Baltimore Museum of Art, the National Museum of Graphic Arts in Mexico, the Cologne Cultural Center, the Uffizi Gallery, and the National Museum of Modern Art in the Czech Republic. 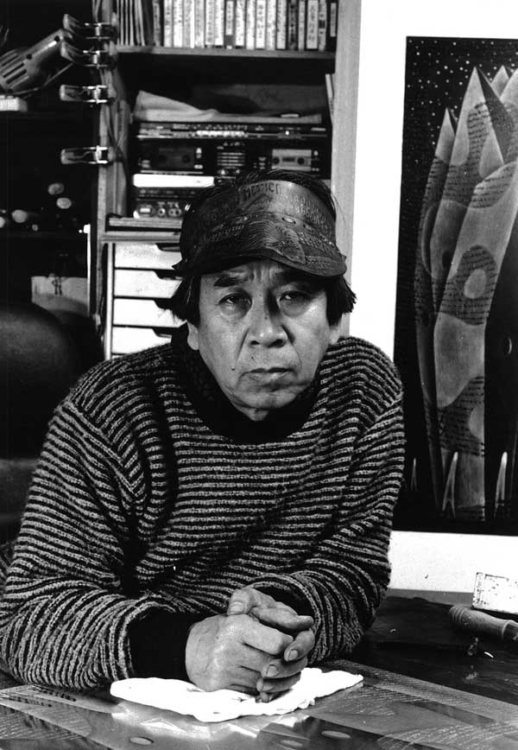 After graduating from Tokyo Fine Arts School, Fukazawa took his father-in-law’s advice and set up an atelier in Ichihara City, Chiba Prefecture in 1950. He also worked as an art teacher at a local high school. Initially, his medium was oil painting, and his works were exhibited at the JIYU BIJUTSU “Free Art” exhibition. The following year, however, he suddenly suffered tuberculous arthritis, the result of an injury received in the bombing of Tokyo. He was forced to live with his right knee in a corset for the next six years. Fukazawa reluctantly abandoned the creation of large-scale oil paintings and began producing copperplate prints in 1954. These prints were smaller and allowed him to make use of metal engraving techniques he had learned during his college days.

In 1962, after receiving the Excellence Award in the Print Division of the 5th Contemporary Japanese Art Exhibition, he was invited by the Mexico International Culture Promotion Association to spend more than 3 months in Mexico City teaching the skills required to produce copperplate prints. Fukazawa's training and demonstrations, all strikingly original, had a great impact on the Mexican copperplate print industry, which had previously known only etching and aquatint. During his stay, Fukazawa was thrilled by the ancient civilizations of the Maya and Aztecs and stimulated by the vibrant land of Mexico. After returning to Japan, he began to work energetically to introduce a new style of prints. Instead of the delicate monochrome world of the past, his new works conveyed the energy of the people in a powerful style combining abstract figures and symbolic colors, bold cutting of copper plates, and color printing techniques.

Fukazawa returned to Mexico for the first time in 11 years to hold a solo exhibition in 1974. On this revisit, Fukazawa enthusiastically explored the ruins of the ancient Mayan civilization and Indio villages, and began frequent use of "shadow" in his titles. Here “shadow” refers to the darkness of the Spanish aggression that still stains Mexican culture.

In the 1980s, Fukuzawa’s style changed again. His motifs changed from the distant history of Mexico to familiar objects surrounding the artist himself, and the human being abstracted in the virtual space of his prints was depicted as something humorous. The mezzotint technique that produces a smooth matière became his turn-to. Since around 1991, however, the mezzotint technique was concealed, and a variety of techniques developed through trial and error experiments were comprehensively integrated in his work.

The automatic hatching machine on display in the permanent exhibition room played a major role in the production of large mezzotint works in the latter half of Yukio Fukazawa’s career. Mezzotint is one of the techniques of copper engraving. A tool called a Belsaw, which has a comb-like blade, is applied to the copper plate in smooth the vertical, horizontal, and diagonal strokes to create the base of the plate. This work, called “hatching" is usually done by hand. The work is very laborious work, making it almost impossible to produce or mass-produce large-scale works. Fukazawa invented the robot “Chintara I,” which has an automatically hatched 20 centimeter Belsaw. This robot, which makes possible mass production of larger plates, was an important innovation in mezzotint printing. 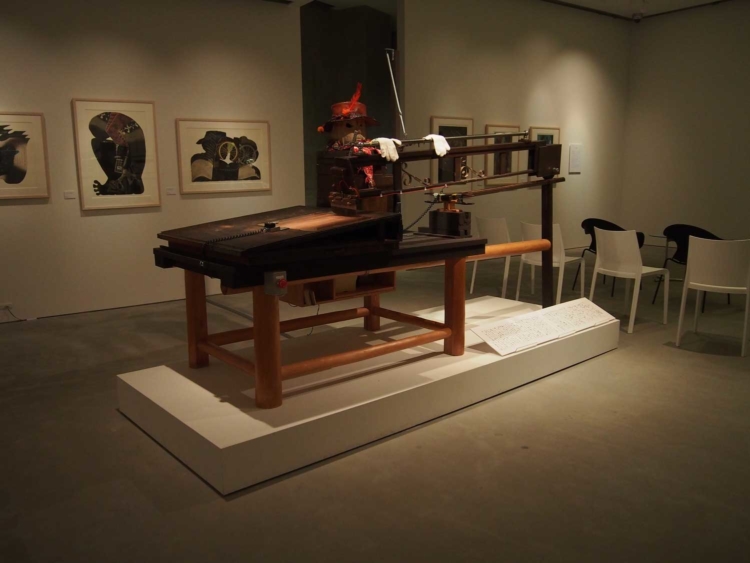